During a press conference this week, José Mourinho made sure to deny Tottenham Hotspur’s interest in Bruno Fernandes, claims that he’s not a target for the club.

“I would definitely say no because Bruno is a player of a level and value that is not for us”, said the manager.

But, well, not even José Mourinho can shut the Portuguese press up, who won’t give up on the biggest saga of the year so easily.

Even though newspaper A Bola highlights the manager’s quotes today, they still give a little bit of hope for those who want to see the Sporting midfielder moving to the London side. 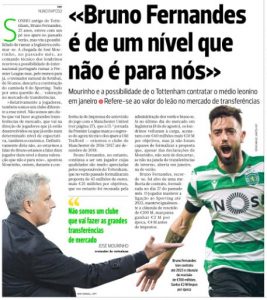 They say Fernandes continues to be a player whose qualities are very appreciated by Tottenham’s board, who had a bid for him rejected in the last summer.

Now it’s claimed that despite Mourinho’s quotes, we can’t rule out this move, because if not in the January transfer window, it could still happen in the summer.

Bruno Fernandes has just signed a new contract with Sporting, but the Portuguese media continues to be pretty confident that he should leave the club once a good bid is made.

Everton still in the picture for free agent – ‘Waiting for...