A story from newspaper O Jogo pointed out that Spurs currently monitor the 26-year-old’s situation, as the club ‘study the signing’ of a player for his position this summer.

The Portuguese media continues to say that Sporting plan to sell Palhinha in the next window, and in a piece today from Correio da Manhã, it’s said the Lions are unlikely to get what they wanted for the player.

The newspaper writes that the midfielder is on ‘top of the list’ to leave the Lisbon side. However, the previous demand of €40m made by the club now ‘seems impossible’ to be reached by interested clubs. 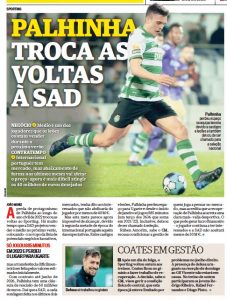 Palhinha isn’t having a great year in 2022, with his injuries and suspensions even taking him out of the national team.

So Sporting aren’t full of arguments to continuing asking for the same price for him. That’s why the Lions are set to put a minimum price of €30m on the player this summer.

Tottenham have been linked to Palhinha for a year, and in case their interest is still strong, this would definitely be a great time for Spurs to go and get him at a reasonable price.