Home Europe From Portugal: ‘Rumour has it’ that Barcelona are considering Wolves player –...
SHARE

Portuguese newspaper O Jogo has a big feature on Ruben Neves on Friday.

There’s nothing unusual in that, they love Wolves, love Neves, and love how everything is going so well in England. Any opportunity the Portuguese media gets… the clubs and their Portuguese players will be celebrated.

This time it’s all about betting and polls for the Premier League Young Player of the Year, despite us only being in September. Neves is up there with the favourites and punters appear to think he has a very good chance based on his start to the season with Wolves.

The bit that really caught our attention was at the end: ‘However, having already been conveyed the interest of Manchester clubs to hire the Portuguese midfielder in the future, yesterday’s rumour has it that Barcelona also ponders a proposal, after the difficulties to secure Adrien Rabiot.’

We cover the Catalan media every day, and they love a transfer rumour. Ruben Neves will be linked at some point this season if he continues to progress but this isn’t a story being pushed at the moment. 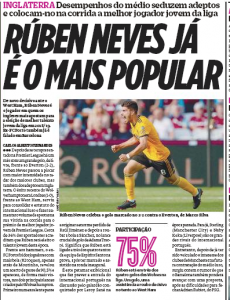 A little digging, and the rumour shows the rumour started with ‘Everything Barca’, who merely suggested he could/should be an option. It was based on opinion and not information.

But that’s enough for O Jogo to push this in Portugal and they probably won’t let go of it now.