After sacking Nuno Espírito Santo on Monday, Porto have reportedly picked Marco Silva as the number one target for the summer.

Running out of contract with Hull City next month, the manager is expected to leave the club for a top flight side, even though he hasn’t confirmed the decision yet.

According to Record’s front page story today, Porto believe Silva is the right man to lead the club back to league titles, something that hasn’t happened in five years now. 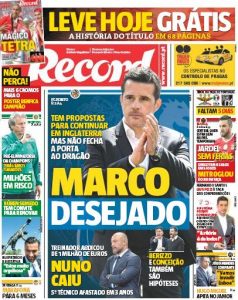 The problem is Silva’s wish to stay in England is taken as something ‘public’ by the Portuguese media now which gives an advantage to clubs like Watford.

Record even claims that Porto can’t pay the same wages as Watford, and the manager would be ‘tempted’ by the Hornets’ offer. Both because of the money as for the sporting project he was shown.

That’s why Porto aren’t working with Silva as the only option, and are also considering Eduardo Berizzo and Sérgio Conceição. The lack of big names in the list is because the budget isn’t very large, which, again, can only help Watford.