As the race for the Benfica defender Ruben Dias goes on, Manchester United’s chase for the player has reported competition from two other clubs.

Juventus’ interest in the defender has been reported for a while now, but now the Portuguese media is taking Atletico Madrid’s pursue very seriously as well.

Newspaper Record claims today that the Colchoneros see Dias as a great player to work under Diego Simeone, and the good relationship the club have with Jorge Mendes could help them to get a deal.

But Atletico would have a hard time competing with Manchester United and Juventus, since both clubs would be ready to pay for the defender’s €60m release clause. 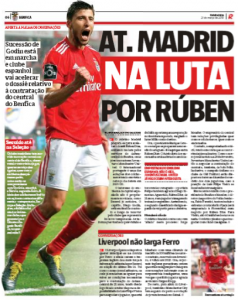 Record still adds that the Old Lady and the Red Devils are ready to do the same with João Félix, who has a €120m tag price.

Now although the links with Ruben Duas are being a constant topic in the Portuguese press, we’re still to see things advancing, as no talks with Benfica are being mentioned lately. So maybe the negotiations will only move when summer arrives.