Despite all the initial excitement over Cristiano Ronaldo’s return to Manchester United, the Portuguese press now starts to admit that things haven’t been going so great.

The Red Devils haven’t won any of their last three games in the Premier League, with the forward not scoring in any of them, and that’s starting to be a reason to worry about the chances of a title.

So Alexandre Pais, former director of Portuguese newspaper Record, today features a column about the ‘Perfect storm at Old Trafford’, where he says the five ‘finals’ the team have in the coming weeks will be key for the season.

More specifically about Ronaldo, Pais points out that when the signing was made, Ole Gunnar Solskjaer claimed he’d like to handle the striker’s fitness by not using him so often. The responses from club legend Sir Alex Ferguson and Portugal manager Fernando Santos, however, made him change his mind. 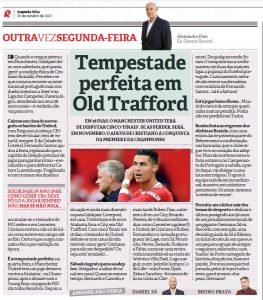 The national team boss used the 36-year-old against Qatar and Luxembourg, and even though he scored four goals, his following game against Leicester City in his return to England is labelled by the journalist as his ‘worst exhibition of the season’, as he ‘appeared tired’ for that match.

“With five ‘finals’ in 18 days, the United coach is struggling with a terrible question: how to ‘manage’ Cristiano so that he doesn’t get sacked? That is, he’s ‘stuck’…” says the column.