Regardless of the latest links between Burnley and SC Braga manager Carlos Carvalhal, the manager’s potential departure from the Minhotos is a real possibility at the end of the season, and the local media shares interesting updates on it today.

Newspaper O Jogo today writes it’s ‘highly likely’ that the coach will not continue at the club for another year. Still, they point out it will all depend on a final conversation he’ll have with their president Antonio Salvador.

It’s said that this meeting will happen after the end of the season. Then they’ll discuss the failed and achieved objectives in the two years Carvalhal spent in charge of the club, then maybe agree his continuity there.

However, with a contract renewal never being discussed and the manager recently hinting that he’d be free to join other clubs in the summer, his departure continues to be the most likely scenario. 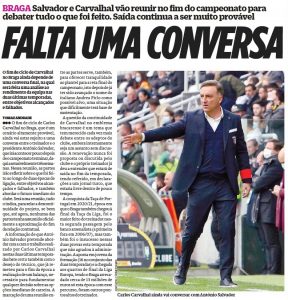 Meanwhile, as newspaper A Bola talks about the ‘potential interest’ from Burnley, the outlet writes that the Clarets are still to formally show their wish of signing Carvalhal for next season.

The outlet recalls that the manager has a good reputation in the UK, and with him set to become a free agent at the end of the season, he becomes a viable option.

A Bola writes Burnley ‘apparently’ look for a foreign manager for their next campaign, regardless of the division they’ll be playing in. Carvalhal, who worked at Sheffield Wednesday and Swansea, already has experience in the Championship and the Premier League.