On Thursday we covered claims from Portuguese newspaper Diario de Noticias that Wolves were now the likelier destination for Rui Patricio.

Napoli had been close to a deal but the Italian club’s new manager Carlo Ancelotti had then turned to other targets instead, preferring them to the Sporting stopper.

That led to the Wolves possibility being brought back, and Patricio was described as being ‘much closer’ to the Premier League club.

Friday’s Record has some explosive claims about the potential transfer, and the behaviour of Bruno de Carvalho. The Sporting president is notorious for falling out with his players, coaches, and pretty much anyone.

His reign in charge of the club has turned into something which has got so seriously bad it’s hard to laugh at the situation any longer. Just in recent weeks, Bruno has suspended manager Jorge Jesus, brought him back, and then somehow managed to not resign after the coach and several players were physically assaulted by a mob at Sporting’s training centre.

There have been suggestions, unproven, that Bruno had some involvement in the attack, but at the very least his actions have encouraged the atmosphere to make it possible. 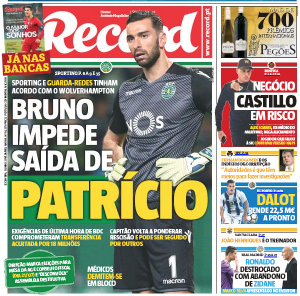 And that’s not to mention the Sporting associates who have recently been arrested over match fixing, with trails of mobile phone messages revealing bribes were offered to players to perform badly against the club.

When it comes to transfers, it feels like Bruno has fallen out with almost every player the club has sold, or their representatives, regardless of the footballer’s standing at the Lisbon side.

The latest looks to be Patricio.

Record report the goalkeeper was a ‘step closer’ to signing for Wolves yesterday… ‘but a last-minute intervention by Bruno de Carvalho ended up messing a business that was already… totally closed’.

It’s claimed that when the Napoli deal began to falter, Wolves were put as an option to Patricio, and Jorge Mendes got to work. The English side offered the same fee Napoli had agreed, €18m, and it was accepted by Bruno.

Patricio agreed and was cleared to have a medical but, just before he signed the contract, Bruno went back on the agreement and demanded €2m more.

Record explain that even Sporting officials, who had prepared the paperwork, were surprised by the intervention and even apologised to others involved in the deal. 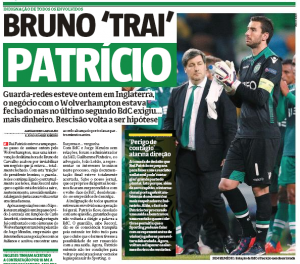 ‘Patricio was devastated by this episode, ensuring that he would not speak to BdC again’, according to the Portuguese newspaper. The goalkeeper, who feels he’s done everything to help Sporting, is considering legal action.

The possibility of attempting to cancel his contract, given the physical attacks and behaviour of Bruno de Carvalho, is now back on the agenda.

Where to now for Wolves? They can wait for the dust to settle and Bruno to rush off into another fight, hopefully leaving Sporting officials to sort out this deal, but it’s a very uncertain situation.

Even if Wolves agree to the extra €2m there’s no guarantee Bruno won’t throw a Bruno again.