Home Europe From Portugal: Fulham have until end of May to communicate on transfer...
SHARE

Luciano Vietto’s transfer to Sporting continues to be taken as pretty much done by the Portuguese media. In the past few days, several outlets reported the agreement between the Lions, Atletico Madrid and the player himself.

And what about Fulham? Well, newspaper Record finally writes something about the Whites today, recalling that the Cottagers still have a say in it all.

The outlet writes that the Premier League side still have a buying option over Vietto, and have until the end of May to tell Atletico Madrid about it.

They’re not expected to use it. Record says it’s not the wish of the club or player to get a permanent deal, and since Fulham are relegated to the Championship, they must cut expenses. 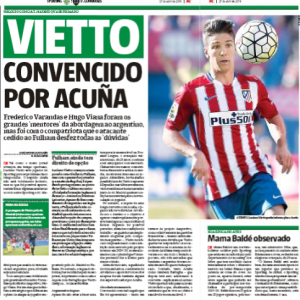 Meanwhile, Vietto is expected to sign a five-year deal with Sporting.

The Portuguese side aren’t paying for the signing, and are actually getting an extra amount in cash, since the deal will involve the transfer of Gelson Martins to Atletico Madrid, which happened last summer and is only being paid for now.