Portuguese newspaper O Jogo features an interesting story today explaining how the Dragons managed to deal with the Covid-19 crisis when it came to their outgoing transfers.

It’s explained that even though the club couldn’t get many good fees over the summer, they’ve managed to let players go on loan with obligatory buying clauses, which will make them comfortable next year.

One of the players who left Porto with this formula was Vítor Ferreira, who joined Wolverhampton Wanderers.

There’d been mixed reports in the Portuguese press regarding his departure, with some outlets saying he moved on a simple loan, and others claiming there’s an obligatory buying clause.

When making the move official, besides making giving high praise to the player, Wolves only said the permanent purchase would be optional. And O Jogo comes up with a different version of it today. 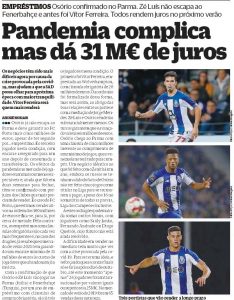 They first say Vitinha joined Wolves on a loan with ‘an obligatory clause of €20m’.

Then they claim that the deal wasn’t made formal this way, but that’s what’s happening, due to the ‘good relationship between the parties and the mediation from Jorge Mendes’.

That makes us wonder about two things. Firstly, why didn’t the clubs make the buying clause obligatory, if that’s the intention? And secondly, supposing that Vitinha does badly at Wolves this season, would they still spend €20m on his signing just due to the ‘good relationship’ with Porto?