FC Porto have set a price for the sale of Jesus Corona this summer, according to reports from the Portuguese media today.

Newspaper A Bola says the Dragons won’t be negotiating for his transfer, and will only let him go for the amount of his €30m release clause.

This is a message which should be spread among all clubs who’ve been recently linked to him, which is the case for the likes of Everton and Wolverhampton Wanderers, both named as interested in the article.

A Bola points out that when signing his latest contract, Corona demanded that his release clause should be decreased from €50m to €30m, and that could be very useful for him now as the Toffees and Wolves circle. 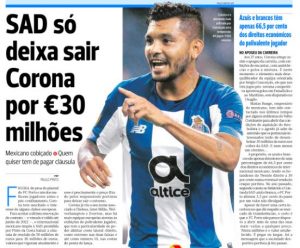 One of the main reasons why Corona has become a big target in the transfer market is that he’s been doing well in many positions for Porto.

He’s been playing as a right-back, as an advanced midfielder and on both wings.

It’s said that his agent Matias Bunge has been contacted by many clubs and is aware of Porto’s demands, so the likes of Everton and Wolves should know about the demands of €30m by now.