At the end of the transfer window, Celtic announced the signing of Portuguese winger Jota, who has joined them on a season-long loan deal.

The 22-year-old’s move to Celtic included an option for a permanent transfer, something unusual for Benfica, and that situation is explained today by newspaper Record.

The outlet features a piece claiming the Eagles have changed their policy regarding loans. They never used to let youngsters go with buying clauses, yet allowed it to happen three times this summer.

Benfica now believe this is beneficial both for the club as for the players. First it’s considered the loanees wouldn’t have new chances in Lisbon anyway, and also because it should give them more playing time with their new sides. 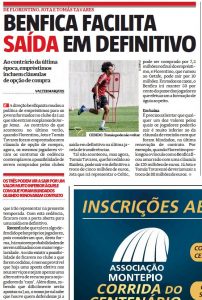 It’s believed that when clubs have a buying option, they tend to make more use of the player. That didn’t happen in dry loans when they knew the footballers would be sent back to Portugal at the end of the season.

Record says Jota’s move to Celtic includes a buying option of €7.5m, and the Eagles would keep 50% of a future sale in case the player stays in Glasgow.

The winger spent last season on loan at Real Valladolid, and now waits to make his debut for Celtic.