Despite the end of the transfer window in Europe’s top leagues, there was still a little expectation that Porto fullback Zaidu would leave the Dragons for some alternative market.

That didn’t happen, with newspaper Record now claiming he should stay at the club and probably move in a bigger sale next summer.

Still, they list the pretenders who could have landed him in the last transfer window, and two Premier League sides are named: Brighton & Hove Albion and West Ham United.

According to the outlet, the Seagulls and Hammers both tried to sign Zaidu on a permanent move, but weren’t able to match the price demanded by Porto. 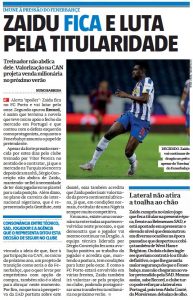 It’s once again not made clear by the Portuguese media how much Porto wanted for the player, who’s protected by a release clause of €50m.

At the end of the transfer window, they had already claimed West Ham considered him to be too expensive, while Brighton’s interest in the signing seems to only be reported now.

Now with Zaidu staying for another season, we’ll certainly see his name back in the rumour mill next year.