Arsenal defender David Luiz has spoken to the official website of Portuguese giants Benfica this week.

The 33-year-old has recalled the good seasons he had at the Lisbon side, where he played between 2007 and 2011.

Besides showing a lot of love for the club, David Luiz didn’t mind promising he’ll return to the Eagles in the future, claiming he doesn’t want to wait too long before doing it.

“I’d definitely like to return. I want to end my career at Benfica, but I don’t know when,” David Luiz told Benfica’s website (via Record).

“Things change fast. What is true today, tomorrow is not. But the feeling doesn’t. It’s true, it’s always been declared and everyone knows that I love Benfica. When I return, I want to have legs to run, compete, be in the same level of other players.

“I’m not going to drag myself. I want to be a major part. So I take care and prepare myself. At 33, I have better numbers than 28, physically.”

During the interview, David Luiz has admitted Benfica ‘don’t need him’, as they have good young defenders in their squad. But that won’t stop him from signing for the club again.

“If Benfica make the decision and I can be part of it, I will be available with the greatest joy in the world. The dream is to step on Estádio da Luz with the Benfica jersey again. It will be one of the most exciting days of my life. I want to go back to wearing the sacred mantle, my 23 of Benfica, and go on the pitch as if I were 19 years old.”

Even though David Luiz hasn’t set a date for his return, Record highlights the fact that his contract with Arsenal expires next year. That would make things a lot easier for Benfica.

David Luiz made 130 appearances for the Eagles, having won the Portuguese League once and the Portuguese Cup three times. He left the club in 2011 to sign for Chelsea. 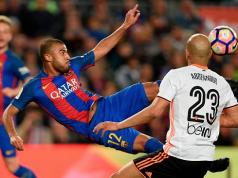