Mauricio Pochettino is still fondly remembered at Tottenham Hotspur, with many believing his successor Jose Mourinho has shown just how good Spurs had it under much of the Argentine’s time at the club.

Now at PSG, Pochettino is facing some struggles again. Very much expected to win the Ligue 1 title without too much of a battle, he finds his Paris side second, three points behind Lille, and with only a buffer of a point over AS Monaco and two over Lyon.

In the Champions League, PSG face Bayern Munich on Wednesday, and it gives Pochettino a chance to put right one of the personal lows of his career.

L’Equipe take a long look at Tottenham’s 2019 defeat to Bayern, a rout which saw the club thrashed 7-2. The French newspaper describe it as the ‘start of the end’ for Pochettino at Spurs.

The defeat ‘branded (Poch) with a hot iron’, and Hugo Lloris let in more goals during a Champions League match than any French 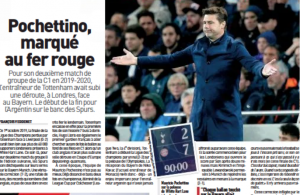 goalkeeper had before him.

Bayern ‘left a mark’ on the manager, and the match ‘hastened’ his exit from Spurs.

Now, L’Equipe say, is the ‘time for revenge’.