Still with Japan at the Olympics, Takehiro Tomiyasu’s future is no closer to getting sorted out on Tuesday.

However, that could change in the coming days, as a decision is expected to be made by the defender, with both Tottenham and Atalanta vying for his services.

The Bologna star is a target for both clubs, regardless of the Cristian Romero situation, and Corriere di Bologna explain a ‘definitive’ choice will be needed soon.

Tottenham, in all this, are the favourites, because the newspaper report that ‘in the last few hours, his entourage has let Bologna know of a preference’ for Spurs over Atalanta. 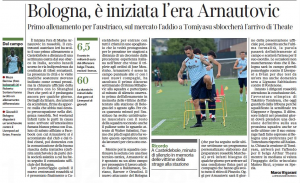 This is good news for Fabio Paratici, of course, and the selling club are simply waiting for the affair to be concluded once and for all so that they can bring in Arthur Theate from KV Oostende, for whom a deal is already sorted.

A domino effect is likely to take place in the next few weeks, and it could all be kickstarted by Tottenham.