In May, a claim came from Spain that Leeds United had secured the signing of Rafa Mujica from Barcelona.

The 20 year old has been playing for Barcelona B, and his contract expired on Sunday.

Last week he said goodbye to the club and then speculation started again that he could be off to Leeds, although the claims weren’t as strong as the first time.

Mujica hasn’t renewed his contract because Barca B want to bring through two other, younger, strikers. One of them the very highly rated Abel Ruiz.

His game time would have been reduced and there didn’t appear willingness from either club or player to get a new contract in place.

Monday’s edition of Mundo Deportivo now sounds pretty certain the player is off to Elland Road. 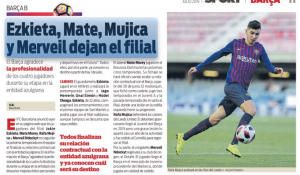 That’s all they have to say on the matter, making it clear, in a short and sweet way, that they believe this one is just an announcement away.