Chelsea signed Olivier Giroud from Arsenal in January 2018 when Antonio Conte was in charge at Stamford Bridge.

Maurizio Sarri replaced his compatriot last summer and under the guidance of the Italian, the striker has started only six games in the Premier League, while he’s made 12 appearances from the bench.

The Blues signed Gonzalo Higuain and allowed Alvaro Morata to join Atletico Madrid on a loan deal this month. Giroud’s appearances could be more limited following the arrival of the Argentine at Stamford Bridge.

Wednesday’s edition of French newspaper L’Equipe claims the 32-year-old is attracting interest from the Chinese Super League as Dalian Yifang were looking to secure his services.

To tempt the World Cup winner to join them, Dalian Yifang’s owners were ready to offer him a long term contract and a salary close to €10m per year. 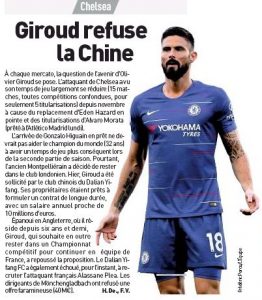 However, Giroud has turned down the approach as his idea is to continue in a competitive league so that he has better chances of being selected for the France squad.