If one thing has been pretty clear with Ousmane Dembele, it’s that he won’t let go of his Barcelona career easily and simply refuses to to be a bit-part player in a transfer for Neymar or anyone else.

There’s been claims conflicting with that at times, but the vast majority of reports from both the Spanish and French media have made it clear Dembele has been determined to stay at Barcelona, a club he fought so hard to join from Borussia Dortmund.

Thursday’s edition of L’Equipe has the player splashed across their front page and the French newspaper takes a look at his transfer situation, and how it ultimately played a big part in Neymar’s failure to return to Barcelona this summer.

Thomas Tuchel has been a big fan of Dembele since their time together at Dortmund, and he got to work over the summer trying to convince him that a move to PSG would be the right next step.

It didn’t work, the 22 year old had cut his holidays short this summer to return to Barca training early, and wasn’t ready to give up on the ‘club of his dreams’. 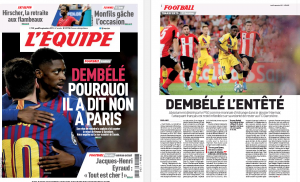 The player’s agent Moussa Sissoko was fully supportive of Dembele’s plan to stay at Barca, and now the long term aim is the Ballon d’Or, with L’Equipe suggesting it’s thought that will be more possible at Barcelona than PSG.