The defender is currently on holiday and is expected to return to the La Liga side this week.

Mundo Deportivo state the 28-year-old faces a ‘key week’ to resolve his future as he entered his final year of contract.

Carlo Ancelotti ‘awaits him’ and the centre-back will have a talk with his manager, where they will present their point of view and hope to reach an agreement that’s beneficial to both parties.

If things progress in the same path as the one that’s marked in the past few weeks, then the former Lens man will live his last few days as a Los Blancos player. 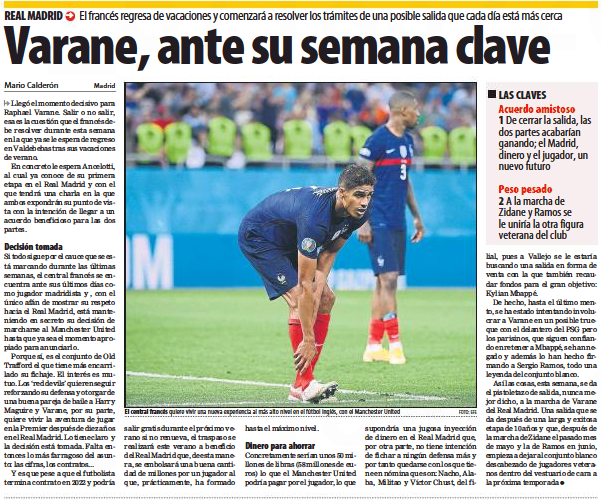 Out of respect for Real Madrid, the France international is keeping his decision to leave the club for United as a secret, until the time is right to announce it.

The Red Devils are keen on the player and the ‘interest is mutual’, since the latter wants to experience a new adventure in the Premier League. The Red Devils are the club that have ‘his signing the most on track’.

A sale this summer will benefit both Real Madrid and Varane since the former can raise money, while the latter’s desire to play in England can be fulfilled with a move to Old Trafford.

According to the newspaper, Ole Gunnar Solskjaer’s side could pay around £50m (€58m) to Real Madrid to acquire the Frenchman’s services.

The Spanish giants, until the last minute, tried to include Varane in a deal to sign Kylian Mbappé, but Paris Saint-Germain, who have the desire to retain the forward, has rejected this option.