Home Europe Player ‘wants to come’ to Barcelona, ‘willing to give up money’ to...
SHARE

Ajax’s Matthijs de Ligt makes it to the front page of today’s edition of Mundo Deportivo and it reads ‘De Ligt wants to come’ to Barcelona.

The centre-back has seen his current teammate Frenkie de Jong agree a deal to join the La Liga winners in the summer and he is keen to continue playing with the midfielder beyond this season.

It’s explained the great desire of the Catalan club is to now bring the 19-year-old to the Camp Nou, but he’s also attracting interest from other big clubs across Europe.

Ernesto Valverde’s side wants to land the Netherlands international and is studying the feasibility of the operation, as the report claims it could cost them €75m plus €11m in variables.

Mundo says the defender does not want to take a decision until he knows the proposal from the Blaugrana.

The centre-half has publicly spoken highly about the club and it’s taken as a hint by Barca. 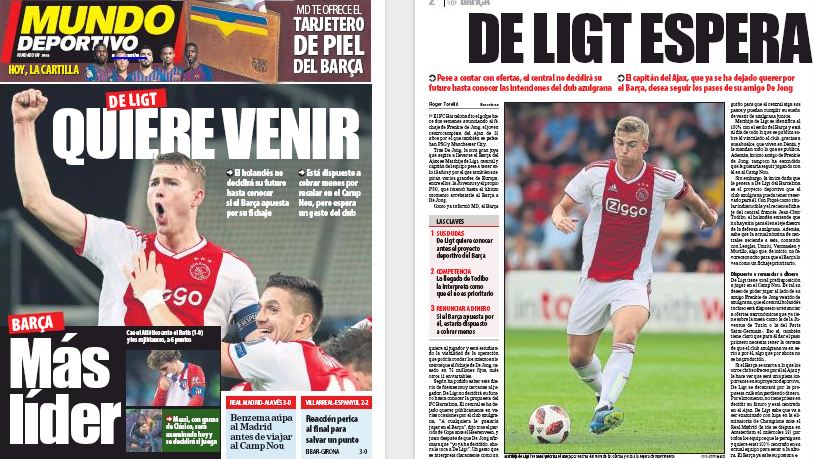 To play for the Spanish champions, De Ligt is willing to give up the astronomical offers he has received from Juventus and Paris Saint-Germain. For him to take the first step, he wants to make sure that Barcelona are serious about signing him.

If Barcelona’s offer comes close to what other clubs are ready to offer him and they’re ready to make him an important part of the project, the Dutchman is ‘willing to give up money’ and accept their proposal.

So far no decision has been take by De Ligt, who is worried by the sporting project at Barcelona because they also have the services of Gerard Pique, Clement Lenglet, Samuel Umtiti, Thomas Vermaelen and Jean-Clair Todibo.