Home Europe Player wanted Everton change this season ‘at all costs’, and ‘not even...
SHARE

The Dutchman will try his luck in the Bundesliga after a very difficult period at Everton.

He had to be convinced. Leaving the Premier League club this summer wasn’t initially part of the player’s plans, as his agent explained earlier this summer, but he knew change at Everton was needed.

Dutch newspaper AD report on Friday that Klaassen wanted things to get better ‘at all costs’ so if he wasn’t going to be used at Goodison Park, that meant getting out of the place.

Once the footballer found out ‘there was no such possibility’ of improvement at the Toffees and ‘not even Marcel Brands’ could help him, then the exit route was the one he wanted. 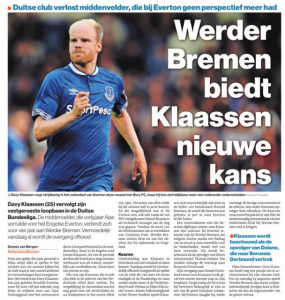 Brands was hardly going to tell Marco Silva he must use the Netherlands international, that would be taking the whole Dutch connection to an unrealistic level and it’s perhaps strange AD have mentioned it.

Despite things not working at Everton, many fans of the club will send him off with the very best of wishes.