Home Europe Everton ‘one step ahead’ for signing – Player explains what he wants...
SHARE

Everton and Napoli have maintained interest in Gabriel Magalhães, if multiple reports coming out of Italy, France and South America are to be believed.

Thursday’s edition of L’Equipe states the defender is ‘wooed by several teams’ in the transfer chase.

The Toffees and the Naples club are mentioned and it’s claimed the two sides are ‘one step ahead’ in the transfer chase. The Brazilian’s sale should bring around €22m to the French club.

Lille manager Christophe Galtier has already confirmed the 22-year-old will be one of the players who will leave the Ligue 1 side this summer.

The French newspaper asked Gabriel about the comments made by his manager. He said, “If I knew what was going to happen, I wouldn’t be lying to you. But I don’t know, so I’m waiting.”

“I’m thinking, too. It’s gratifying because there are a lot of clubs talking about me. I want to go as high as possible. I came to Europe for that reason.”

When further quizzed if he is more attracted by England or Italy, the South American explained: “Both are good championships. I talk a lot to Luis Campos (President Lopez’s sports adviser) to see where it is best for me because he has a lot of experience.

“I also speak with my agents, with Gérard Lopez, with José (Fonte) [who has played for Crystal Palace, Southampton and West Ham United].”

Gabriel also made it clear he has not held talks with Napoli manager Gennaro Gattuso, despite reports stating otherwise. This should come as a welcome boost for the Merseyside club. 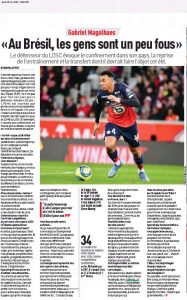 “I don’t know, we haven’t spoken. On the internet, on [social] media, there are many things that come out. We do not know what is true. I see every day, ‘ah Gabriel is going here, going there…’ But in fact, we do not yet know where to go,” he stressed.

The player also talked about the conditions he will have to consider when deciding his next destination.

“Wherever I go, it will be to play, to be at the top, at the highest level. And especially in a team that will allow me to go to the Seleçao. This is my big goal, my dream. I hope I will be there soon,” Gabriel concluded.