The past 24 hours has been full of turnarounds for Tottenham Hotspur.

Following the collapse in the deal to have Paulo Fonseca in charge of the club next season, Spurs were expected to announce a different manager, and that probably would change everything they had planned for their near future.

One of those issues is the list of signings that the club should make. Each coach obviously has his own preferred targets, and a new name arises in the Portuguese media today.

The reason is that the 29-year-old was really close to being sold to Fiorentina this summer. And as soon as Rino Gattuso decided to leave the Italian club, the transfer was ‘blocked’, as the manager, and likely his agent Jorge Mendes, was the one who wanted his signing in first place. 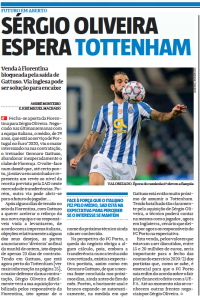 Record doesn’t seem to have any concrete information on Tottenham’s interest in signing Oliveira. All they say is that Gattuso is the one who wished to have him at Fiorentina and should now ask for his signing at Spurs as well.

Porto were ready to sell the player for between €15m and €20m, as his transfer would be a big help for their financial situation. So in case Tottenham do go for his signing, it’s likely that the Dragons will remain open to negotiating it.

Of course there’s been a change in Gattuso’s situation with Spurs, with the club apparently backing down on his signing. But since Record’s story was probably written on Thursday night, that’s the scenario they had found back then.