It appears that Chelsea are about to miss out on Achraf Hakimi despite putting in a great shift to convince Inter to send the Moroccan to Stamford Bridge instead of Paris Saint-Germain.

Unfortunately, it appears the player’s desire to play for the Ligue 1 runners-up has trumped the Blues’ attempts, as RMC Sport are reporting Inter and the French side are now ‘closer’ regarding a move.

‘Negotiations are moving forward’ in order to find an agreement for the defender’s transfer, with Hakimi having already ‘given his agreement to Paris for a five-year contract’.

As things stand, the former Borussia Dortmund man is waiting for the two sides to shake hands ‘in order to fly for the French capital and undergo his medical’. 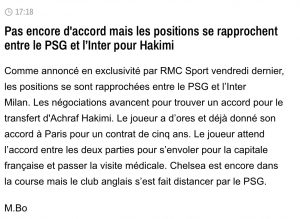 Regarding Chelsea in all this, they are said to ‘still be in the race’, but the Premier League side have now been ‘left behind’ by their Ligue 1 counterparts for the Inter defender.