After many articles were written, including by us, about Markus Schubert’s probable transfer to Arsenal, the Dynamo Dresden starlet won’t be going to London after all, heading to Schalke 04 instead.

On Monday, a flurry of reports emerged from Germany, kicked off by Ran.de, who stated a move to Gelsenkirchen was ‘imminent’, with the ‘last details only needed to be clarified’.

The youngster is expected to provide backup and competition for Alexander Nübel, who is himself apparently drawing interest from Bayern Munich.

Ran.de explain this might be one of the reasons why Schubert chose Schalke instead of Arsenal, seeing an opening for a number one spot, a path that would have been severely blocked by Bernd Leno at the Emirates. 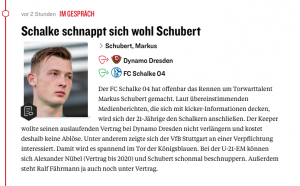 On top of the aforementioned outlet, Kicker have also confirmed the information, suggesting this certainly is an opportunity missed by the Gunners, who were reportedly hoping to sign Schubert on a ‘free’ and then loan him out next season.