On July 25th, Mundo Deportivo claimed Chelsea were demanding €70m for Barcelona target Willian. There were ‘adamant’ they would not drop below the figure.

The La Liga winners wanted to lower the price tag and were ready to offer Andre Gomes to Chelsea. However, the Blues turned down the proposal and therefore Ernesto Valverde’s side ended up signing Malcom from Bordeaux.

According to a ‘Top Secret’ column of the Catalan newspaper on Thursday, the FA Cup winners called an executive of the Spanish champions to lower Willian’s asking price after finding out the club had shifted focus to Malcom.

Mundo Deportivo believes the west London club’s willingness to lower the South American attacker’s price tag indicates that Willian could he allowed to leave this summer, with them believing he’s off to Manchester United.

Barca’s belief that Willian is leaving Chelsea has been ‘confirmed’ by the Premier League club chasing the deal once they heard about Malcom.

Now that Barcelona no longer want the player, they are of the belief the Brazil international is ‘surely heading to Manchester United’ for a fee in excess of €50m. 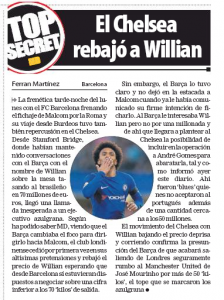 Willian has played under Jose Mourinho when the latter was in charge at Chelsea. A move to Old Trafford will see the 29-year-old reunite with his former manager.

This claim from Mundo Deportivo turns the situation on its head, with it looking like Chelsea may have overplayed their hand. With Barca now signing Malcom, there can be no auction between them and Manchester United.