With João Palhinha’s transfer from Sporting to Fulham very close to being finalised, newspaper O Jogo today features a few more details about this move.

The outlet claims the agreement is ‘practically’ sealed and should be completed this week, with the player signing a four or five-year deal.

The player is currently on holiday, and wanted to get it all sorted before leaving Lisbon, but the battle between Fulham and Wolverhampton Wanderers ended up delaying the process.

O Jogo writes that Wolves haven’t given up on the signing yet, but they couldn’t reach a deal with Sporting, who have already accepted a €20m offer from the Cottagers. 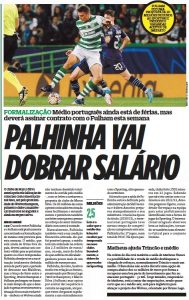 According to the report, Palhinha was making just over €1m per season at Sporting, and is now set to make around €2.5m per year in London.

It’s said the player ‘hesitated’ when making his choice, as he was being pressured by managers Bruno Lage and Marco Silva, and ended up accepting a move to Fulham because of the quick deal reached between the Whites and Sporting.