Fulham fans are certainly anxious about the confirmation of signing João Palhinha, as despite the many reports of an agreement between the Cottagers and Sporting, the transfer is still to be completed.

It’s well known that the midfielder is currently on holiday, and just so the Fulham faithful can have the latest on the situation, let’s cover what is being said in Portugal about this case today.

First in a story from Record, which also says Matheus Nunes’ transfer to Wolverhampton Wanderers is waiting for the player’s return from Brazil, they claim Palhinha’s situation is similar.

They write, however, the move to Fulham is actually even ‘more advanced’, as he’s close to moving to Craven Cottage for €20m. And since he’s enjoying his time off in the Maldives with his wife, the transfer will only be made official once he’s back.

Record adds that Palhinha will sign a five-year deal with the Whites. 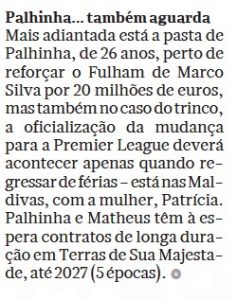 Meanwhile, whilst also talking about Sporting’s exits, newspaper Jornal de Notícias points out that Palhinha has a €20m bid from Fulham waiting for him.

They say the ‘final answer’ to the offer should be given ‘this week’. Unlike Record, they don’t make it clear the answer will be positive.

But following so many reports from Portugal claiming the move is happening, it sounds like it’s a matter of days until Palhinha returns from his holidays and everything is sorted out.