On July 8th, we carried a report from AS, who explained that West Ham United have been handed a second chance to sign Martin Braithwaite after failing to land him last summer.

Wolverhampton Wanderers, along with the Hammers, are in the picture for the Barcelona striker.

That’s according to Sport, who say the 30-year-old’s impressive displays for Denmark at the Euros have not gone unnoticed and interest in him has been ‘increasing in recent weeks’.

Brighton & Hove Albion have also emerged as a candidate for Braithwaite, but he prefers other options.

West Ham and Wolves ‘appear in the preferential order’ of the frontman and he’s ‘more seduced’ by these two clubs than the Seagulls.

The former Middlesbrough man is aware his game time will be further restricted following Sergio Agüero and Memphis Depay arriving at the Camp Nou. Therefore, he has ‘agreed to seek’ a consensual exit from the Camp Nou. 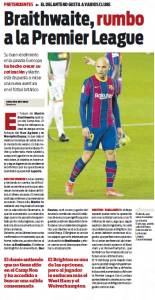 Ronald Koeman’s side have an intention to cash in from the Dane’s sale and his exit would also their salary budget. Barca’s hope is to raise €15m from the attacker’s sale in the ongoing window.

A deal could be concluded this summer if either West Ham or Wolves were to convince both Braithwaite and Barca by making an offer.