Kiko Casilla swapped Real Madrid for Leeds United in January 2019, moving from the Spanish giants on a free transfer.

The goalkeeper had a mixed time with the Whites, and eventually saw himself replaced long term. At the start of this season he was allowed to join Elche on loan for the current campaign.

He’s been a regular for them so far, playing in all nine La Liga matches. Elche are currently 14th, and have conceded a rather respectable ten goals across those nine matches Casilla has appeared in.

With a contract with Leeds United expiring in June 2023, a decision will need to be made before next season about what happens with the stopper. There doesn’t seem a role for him at Elland Road, and the player has now made it very clear he doesn’t want to return.

Speaking to Spanish newspaper Mundo Deportivo, the 35-year-old has been quoted as saying: “It will be difficult for me to fulfil the year I have left. When I left there it was because of that, because my time there is over. I think I will not have problems with the 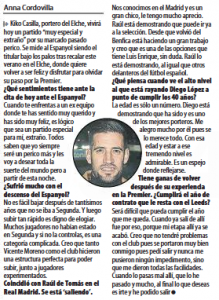 club because they behaved very well with me, because I asked to leave and they never put any impediment on me, they gave me all the facilities to leave.

That would suggest Casilla is looking for his Leeds United contract to be terminated, allowing him to then sign a permanent contract at Elche or elsewhere.