Kamil Grabara arrived in England when Liverpool took him from Polish side Ruch Chorzów in 2016.

After spending over two years with the Reds’ academy, the goalkeeper has been out on loans since the start of 2019.

The custodian returned to AGF for a second loan spell back in the summer, having spent the previous campaign at Huddersfield Town.

This week’s edition of Tipsbladet has a wide-ranging interview with the Liverpool man, where he made his feelings known on what it means for him to go out on loan.

“How do I feel about being sent on loan and the things that come with it? Of course, this is not ideal. But if I hadn’t been picked up by Liverpool when I was 17, I would hardly have evolved as I have. I would not have been the same goalkeeper as I am today,” he said.

“There are always pros and cons. I’ve played a lot of chess, and my teacher said you give something away when you take. So things are rarely black-and-White.”

The Poland U21 international has impressed for AGF in recent weeks as he hasn’t conceded a goal in the last five league matches. His work in Denmark is monitored by the Premier League winners and he’s in regular contact with the Anfield club.

“I’m in constant contact with people from Liverpool. They watch my matches and all the highlights, they’re also interested in my training and follow me. It’s quite normal,” the keeper said.

“Chelsea do the same when they send lots of players on loan. They have a department that follows the loaned players. But they do not mean anything in that way for my daily work or that I thrive in Aarhus. There are lots of people at AGF who help with this.”

Grabara will have to return to Liverpool later in the summer and he doesn’t know where he will play next season. He details various reasons for that.

“If I start thinking about where I’m going to play next season, I usually drop dramatically in my performances. That’s one of the things I’ve stopped even speculating about, and it’s working for me. I can set goals for myself and think about what I want, but I’m a thousand percent focused on now,” Grabara stressed. 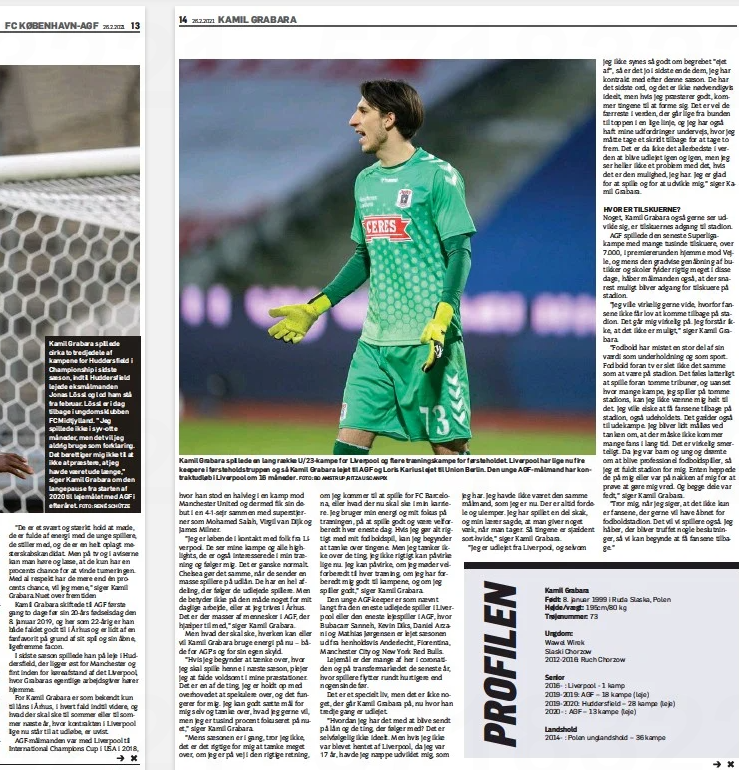 “While the season is underway, I don’t think it’s right for me to think much about whether I’m heading in the right direction.

“I use my energy and my focus on training, on playing well and being well prepared every single day. If I do everything right with my football game, I can start thinking about things. But I don’t think about the things I can’t really influence right now.”

“I can influence whether I will be well prepared for each training, whether I have prepared well for the matches and whether I play well.”