Tuesday’s edition of L’Equipe has published a long interview with Manchester United’s Paul Pogba and former Arsenal star Patrick Vieira, in which the duo explain their journey, their roles on the pitch and their vision of football.

The Red Devils took the midfielder back from Juventus in 2016, four years after he left as a free agent.

Pogba established himself as one of the best midfielders in Europe during his time with the Turin club.

Vieira, who is without a job since he stepped down as OGC Nice’s manager, admitted he preferred watching the France international at the Serie A side because he enjoyed more freedom when attacking.

In response to the comments made by the 44-year-old, Ole Gunnar Solskjaer’s man said: “It’s true that at Juve it was different from Manchester United.”

“We were already playing with three midfielders [at Juve], in 5-3-2. I had the freedom, I had to be in the box, to attack. It was an obligation. In Manchester, I have the freedom to go into the box, but the priority is to play and defend.”

When immediately followed it by asking what’s it like with the national team, Pogba explained: “We play in 4-2-3-1, also a diamond. I am a little more in the transmission, in the construction. But I have more freedom than in Manchester to enter the box, to make runs forwards.

“At the same time, when you have Griezmann, Kylian, you don’t want to enter their spaces, you don’t need to.”

Although suggesting he has and had more freedom to go forward with France and Juve respectively, Pogba has made it clear the collective goal of the club takes priority over individual preferences. 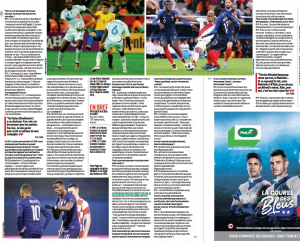 “…I would like to play more offensive [laughs]. To score fifteen goals per season is what I would like,” Pogba stressed.

“But Patrick said it, we must put ourselves at the service of the collective. In Manchester, as in blue, the collective will always come before the player.”