Liverpool fans will certainly remember Rafael Camacho, who spent three years at the club between 2016 and 2019.

The winger joined the Reds’ academy in a move from Manchester City and made his way to professional football under Jurgen Klopp.

Camacho couldn’t find a place in Liverpool’s first team, and that’s why he ended up leaving for Sporting in a €5m move a couple of years ago.

And even though his arrival in Lisbon was taken with a lot of excitement, the 21-year-old is now going to his second loan. He spent the first part of the year at Rio Ave, and now joined Belenenses on a season-long deal.

Camacho is today featured in an interview with newspaper A Bola, and recalled his time at Liverpool, saying he’s still in touch with his former teammates for advice. 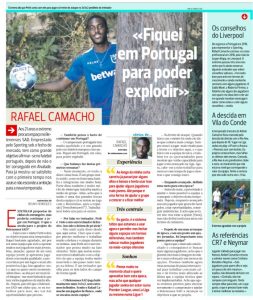 “It was very good for me in terms of growth and I still keep in touch with some players,” Camacho told A Bola.

“Sádio Mané, Roberto Firmino, Fabinho are some players with whom I got along well and from time to time they send a message to find out how I am and to give some advice.”

Despite the many matches for Liverpool’s youth levels, Camacho only had two appearances for the Reds. One at the end of a Premier League clash against Crystal Palace, and as a right-back in a FA Cup loss to Wolverhampton Wanderers.