Huge expectations surrounded Felipe Anderson when he joined Porto on a loan move from West Ham United back at the start of the season.

The midfielder landed in Portugal with high status, and was seen as a reinforcement who could help the Dragons in their challenges for the Liga NOS and Champions League.

However, as told today by newspaper A Bola, Felipe Anderson’s season at Porto has been quite disappointing, especially in the past few months.

Their story shows that following his difficult start at the club, the Brazilian only made four appearances in 2021, having played a total of 165 minutes. 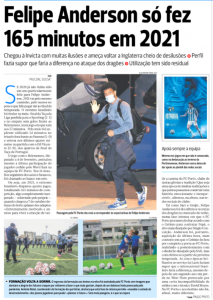 A Bola doesn’t even mention any chances of Porto trying to sign Felipe Anderson permanently. The only thing they say about his future is that he could be back at West Ham ‘full of disillusion’ following this disappointing season with the Dragons.

With his contract with the Hammers expiring in one year, it’s hard to predict what will happen with the 28-year-old. His loan last summer had a lot to do with the few chances given by David Moyes in the previous season, so a permanent exit from London wouldn’t be surprising.