Borussia Mönchengladbach signed Alassane Plea from OGC Nice in the summer transfer window and prior to his switch to Germany, he was attracting interest from the Premier League.

Earlier in July, we covered a report from French newspaper L’Equipe, who mentioned the 25-year-old was a target for Newcastle United, Tottenham Hotspur, Fulham and Wolverhampton Wanderers, but the Bundesliga side were successful in securing his services.

Today’s edition of Monaco-Matin has a story about the former Ligue 1 player and they again mention about the Tyneside club’s interest in the striker, along with West Ham United.

The two English clubs were ready to offer a better salary than what Dieter Hecking’s side did, but the Frenchman snubbed approaches from the Magpies and the Hammers as he was not impressed by their sporting projects. 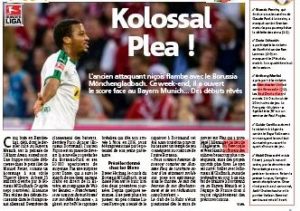 It looks like Plea made the right decision to join his current club as he has had a good start to the season. He’s scored five goals in the league and is the second highest scorer in the Bundesliga, behind Borussia Dortmund’s Paco Alcácer.