Every day, the Italian media find a new way of making it clear to their readers that Manuel Locatelli has no interest in joining Arsenal.

Calciomercato’s report on Thursday morning was rather straightforward, and following claims the Italy international was refusing to answer phone calls from the Gunners, he’s made it known once more he has no intention of going to the Emirates.

Corriere dello Sport’s article on the matter today echoes the aforementioned claim, as they state that for Locatelli, it’s ‘Juve and only Juve’.

In fact, it’s reached the point where the midfielder has said ‘he would rather spend another year at Sassuolo than fly to the Premier League and accept Arsenal’s offer’. 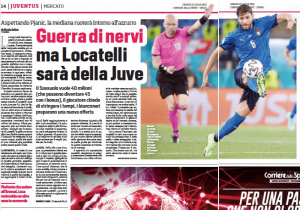 The Gunners, according to the newspaper, are ‘unsuccessfully ready to please’ the Serie A side ‘with €40m + bonuses’.

With that in mind, both Juventus and Sassuolo continue their talks to find an agreement that suits all parties, but that has yet to happen.

We think the message is rather obvious now, and Arsenal should really be looking elsewhere.