Home Premier League Player ‘rather inclined’ to staying at Tottenham – ‘Not indifferent’ to impact...
SHARE

L’Equipe today has an article on France players who have contracts expiring at the end of the season, and what may happen with them.

Hugo Lloris is obviously one of the men mentioned, with no renewal seeming imminent for the Tottenham goalkeeper.

There’s been links with other clubs, and French claims of interest from Rennes and Nice, yet it’s believed the player is tempted to stay where he is, at least partly because of his current manager and the World Cup being on the horizon.

Antonio Conte wants to keep the player, but the French newspaper say that was ‘not necessarily the case’ with previous managers, and that’s why Lloris finds himself in the situation he is now.

The France and Spurs skipper is ‘not indifferent’ to what Conte is aiming for at the club, and the impact the Italian has had. 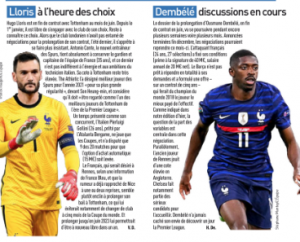 Tottenham are now expected to push more strongly for a renewal, and they should find a positive response, with it stated the stopper is ‘rather inclined’ to continuing with Spurs.

That could see the 35-year-old sign a one year extension, which would take him to summer 2023 and beyond the Qatar World Cup, finding stability that Didier Deschamps would be pleased about.