Bruno Fernandes has again been speaking to the Portuguese media, and whilst he made it clear he remains happy at Sporting and won’t force an exit, he reiterated a desire to play in the Premier League.

O Jogo were quite blunt when bringing Tottenham into their questioning, asking: “Wish for 2020? Being trained by Mourinho?”

The goalscoring midfielder tried his best to avoid a direct answer, and replied: “(laughs) The desire for 2020 is to continue to be happy to do what I like best, which is to play, to be able to do it where I feel well, where I feel at home and, especially, where my family is doing well.”

Tottenham were the only club to make an official offer for Bruno during the last summer window, however it was laughed away by Sporting. A chunk of the bid was based upon bonuses, and that would have required Spurs winning both the Premier League and Champions League.

When Jose Mourinho replaced Mauricio Pochettino the story was given another boost, with the Portuguese media insisting the manager is a fan and that a transfer could be on the cards.

Mourinho himself has suggested Bruno is out of the range for Tottenham, especially in the January market, yet that hasn’t stopped the rumours continuing. 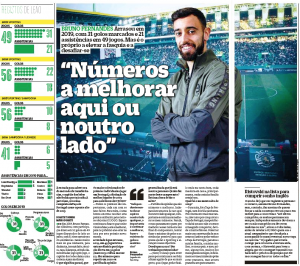 Asked about a previously stated desire to play his football in England, the 25 year old made clear he stills feels the same way: “Until they are fulfilled, dreams always remain.”

So far this season, Bruno Fernandes has scored 13 goals and made 13 assists.

He’s recently been described as a No.10 in the English media, but he’s actually more of an energetic attacking midfielder, covering a lot of ground and drifting to the right.