Leicester City want to sign Wesley Fofana, and the Saint-Étienne defender is keen on making the switch.

The Foxes interest in the centre-back has been gaining traction in the last few days, but Claude Puel dismissed the possibility of the 19-year-old leaving the club this summer.

Fofana was not happy with the comments made by his manager on Thursday, and has now publicly revealed his intention to join Brendan Rodgers’ side.

“I got a lot of offers. It’s okay to have checked them with my agents. They didn’t agree to me speaking [publicly]. But what just happened will break something in me. My decision is made: I accept an offer,” he told L’Equipe.

When quizzed if’s he has made the decision to accept Leicester’s offer, the player said: “Yes, I’ve always dreamed of playing in England.”

“Last summer, I had thought about leaving. But as the club did not agree a deal with Salzburg, I stayed, focused 100% on Saint-Étienne. This winter too. This time, I can’t refuse. Where I come from, the northern districts of Marseille and from a not well-off family, that is not possible.

“I’d be crazy to say no to Leicester. This contract can change my life. I have to protect my family…  If you take into account the sporting and financial aspects, I am obliged to say yes.

“I’m aware [taking risk of going abroad], but I am determined and mentally ready to change my life. By putting in that sum Leicester are proving they really want me. It’s not like I want to leave for a club where there are a lot of centre-backs. It’s a real sporting project.”

The Frenchman was forced to speak out about his intention to join Leicester after holding a private conversation with Puel.

“I went to see the coach yesterday morning, to tell him what happened, that I am not in a right frame of mind, and that I want to leave,” the player stressed.

“I tried, but couldn’t discuss my issues with him. No big deal. I manage on my own. I’m used to it. [Pule said] that I am 100 percent part of the project and that there is no way I will leave during this window.”

Despite the club’s stance, Fofana has made it clear he won’t go on a strike. However, he still remains keen on moving and has urged his employer to accept Leicester’s proposal.

“Actually, I wouldn’t have asked to leave if I knew that was messing the club up. My wish is that everyone is happy. And we can all be,” Fofana explained.

“I am worth €30m! Isn’t that crazy? This is my price set by the club after the French Cup final. When the money is there, you have to take it. It would be even crazier to say no. If I stay and don’t have a good season, we’ll all be sorry. And it will be too late.

“Who can guarantee that I will be worth €40m or €50m [next summer]? Who was sold at this price without playing the Champions League and without being an international? Nobody.

“All the clubs are impacted by the health crisis. Besides, in a year it will be almost impossible for a player like me to go to England because of Brexit.

“Please think carefully about this offer and put yourself in my shoes. Especially the coach. He’s the one who will make the decision. He explained to me yesterday morning that he is not just the coach, he is the general manager.

“If I understood correctly, this is the boss. He has to think about the club’s best interests and not just the coach’s, right?

“He knows me very well and he gave me his trust directly. This is to say thank you that I extended, in April (until 2024). During Wednesday’s training, he saw that I was already there, that I see myself better elsewhere.

“I listen to him and I understand him. But he too must do the same. I hope he will open his heart and listen to me. “ 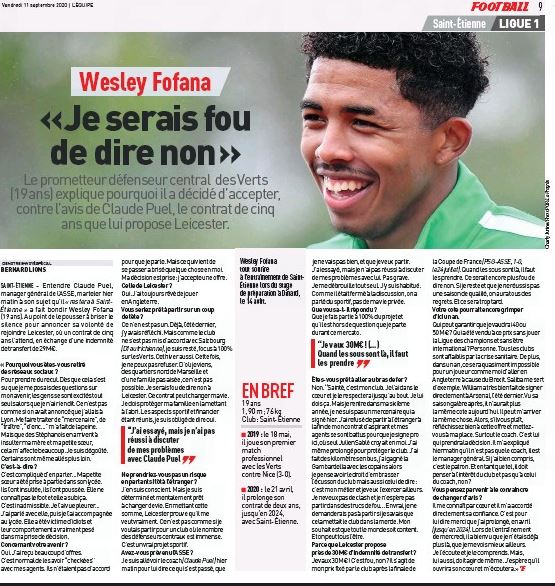 Fofana was subjected to insults on social networking platforms by a section of Saint-Étienne fans, and that has also weighed on his decision to accept the five-year contract from Leicester.

“As soon as it was known I was considering my future, people got excited on their own even though I didn’t say anything,” the Frenchman stressed.

“It’s not like we announced that I’m going to Lyon. Being called a ‘mercenary’, ‘traitor’, has hurt me. But Stéphanois ended up insulting my mother and my little sister, it affected me a lot. I am disgusted. Some have even gone further.

“It’s hard to talk about… My little sister was targeted in her high school. They insulted her, they pushed her.

“She does not know football and she suffered that. It’s unacceptable. I saw her cry… I spoke with her, and then I took her to high school. She was the victim of idiots and their behaviour. [That] really weighed on my decision making.”