We’ve lost count of how many times we covered stories from Portugal saying João Palhinha is travelling to England in the ‘coming days’ or ‘next few hours’, but that’s really what they’re saying once again on Thursday.

The midfielder’s transfer to Fulham is now detailed by A Bola, who remains confident that it’s close to happening.

Following all the recent issues regarding the agents’ commissions from the move, the outlet claims this obstacle ‘will be overcome’, with the representative about to sort the problem, and the player will go to England ‘in the coming days’.

It’s said Sporting and Fulham have an agreement for Palhinha worth €20m plus €2m in bonuses, and the agreement between the cottagers and the player was reached ‘on Friday’. 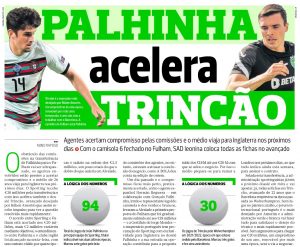 The midfielder is set to sign a four-year deal with the Cottagers, and will make €2.5m, which is twice as much he used to earn at Sporting.

Now that agents Hernan Reguera and Jorge Mendes sorted out the commissions, the transfer is closer than ever.

A Bola sounds very confident that Palhinha is moving to London ‘still this week’, and Sporting now have the green light to go after his replacement, which is Barcelona’s Francisco Trincão.