Unable to find any game time at Arsenal, Pablo Mari needs to find himself a new club very quickly.

There was talk of a return to Brazil, but that didn’t interest him, with the defender wanting to remain in Europe and play at the highest level.

Thankfully for him, Udinese in Serie A are keen on his services, and a deal is in the works for the Spaniard to get the game time he isn’t finding under Mikel Arteta in London.

Gazzetta dello Sport have a big article on his situation on Friday, claiming the player is ‘preparing to make’ the journey from Colney to Udine.

In their description of the player, the Italian newspaper don’t exactly start off by selling Mari to their readers, stating that while ‘his name is more like a dancer than a footballer, his physical structure and movements immediately make it clear that he has little to do with dance’, before pointing out ‘he is not particularly fast’. 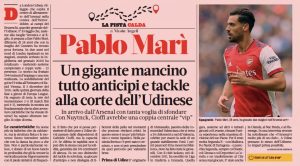 They do, however, praise him for being very solid, standing at 193cm, that he ‘makes casual use of the sliding tackle’ and ‘doesn’t refrain from getting rid of the ball in moments that can prove to be critical’.

Basically, ‘he is a little more British and less Hispanic’.

All in all, he is currently seen as the ‘hot track’, and ‘on his way’ from Arsenal, suggesting this is definitely on the cards, but best wait for it to be all official first.