Having come up through the ranks of the Ligue 1 side’s youth system, the right-back was promoted to the first team last season and he went on to play 11 matches, which includes two Champions League appearances.

The 19-year-old’s performances have caught attention of the Hoops, along with clubs in France, England and Italy.

L’Equipe, however, don’t provide names for the teams from aforementioned three countries to have shown interest in the defender.

The France U18 international has entered his final 12 months of his contract and Rennes offered him to further extend it by one more year.

The renewal proposal hasn’t convinced the player, which is why he could be on the move this summer. 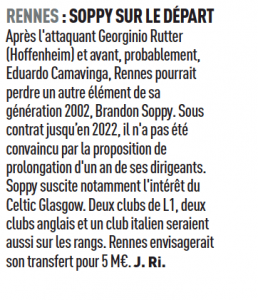 As per the newspaper, Rennes ‘would consider’ cutting ties with Soppy if they receive an offer of €5m.

Soppy has clearly caught the eye of Celtic manager Ange Postecoglou and only time should tell whether or not the Scottish side will make an offer to sign him this summer.