Everton have been linked with Jean-Clair Todibo as Schalke have decided against making the Barcelona owned defender’s loan move permanent.

Over the past few weeks, the Catalan media have talked about the Toffees’ interest in the centre-back.

Sport on Tuesday reported the La Liga winners are ‘delaying negotiations’ with the Merseyside club for the 20-year-old as they plan to use the Frenchman as a bargaining chip to sign Juventus’ Miralem Pjanić.

Today’s edition of Mundo Deportivo focuses on those Camp Nou players who could help the Catalan club raise funds or be included in exchange operations.

The former Toulouse man is among them and Quique Setién’s side are planning to get €25m for him.

It’s claimed Todibo is ‘on the agenda’ of Carlo Ancelotti’s side. The ‘close relationship’ between the two clubs, following past deals involving Yerry Mina, Lucas Digne and André Gomes, would mak 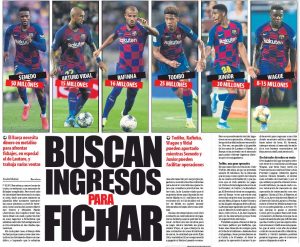 e it easier for any potential transfer.

The newspaper, however, makes it clear the Spanish champions have so far not received any official offer from Everton. They do make the distinction of ‘official’, so perhaps there’s been some approach.

In addition to this, AS Roma, Bayer Leverkusen and AS Monaco have also asked about the player.