Home Premier League Chelsea Player has ‘never been so close’ to leaving Chelsea – Exit could...
SHARE

Over the past 24 hours, Chelsea’s Romelu Lukaku went through all of the emotions about his potential move from Stamford Bridge to Inter.

This is according to Gazzetta dello Sport, who say the Belgian’s feelings ranged from ‘exaltation to nervousness, distrust and then smile again’ before finding ‘newfound enthusiasm’ around dinner time.

It’s pointed out the Chelsea player ‘did everything in this affair’, and he is now ‘about to achieve the goal he has set in mind last autumn’, which is why he had ‘planned’ *that* interview with Sky Italia in December ‘before flooding his teammates, agents and manager with messages about his possible return’.

Gazzetta reveal that when the Blues said they wanted €10m for a loan, Lukaku thought it was all done, but Steven Zhang’s (the Inter president) decision to say no and negotiate further had ‘thrown him into despair, fearing that everything might fall through’. 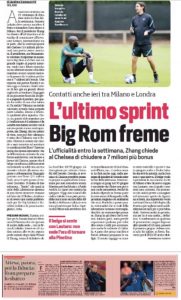 However, his new lawyer, Sébastien Ledure, did a good job of keeping everyone talking, and the Chelsea forward’s ‘nervousness then gave way to a new confidence once he learned from the meeting in Milan that the white smoke was close again’.

In fact, Lukaku has ‘never been so close to dressing up in the Nerazzuri again’, and while he wasn’t expected to be able to do so before July, this could change throughout negotiations and ‘it’s not excluded that the player may land again in Milan as soon as this weekend’.

Corriere dello Sport have a few numbers, explaining that Zhang has put forward a €7m + bonuses offer to Chelsea, which is what he’d like them to accept.

An answer from Todd Boehly and co. is ‘expected today or tomorrow’, but Inter ‘believe they are already making a great effort by taking away from the Londoners the signing of a player outside of the project and paying the loan’.