When Chuba Akpom moved to Belgium on loan during the January window it was a surprise to many Arsenal fans, simply because of the club.

Sint-Truidense Voetbalvereniging, better known as STVV, aren’t one of Belgium’s biggest clubs and it was perhaps considered fortunate for them to sign Akpom and unusual for him to make such a choice.

Shortly after joining, the 22 year old gave several interviews to the Belgian media in which he explained his choice, and came across as someone who had thought about things in some depth.

The move has gone reasonably well, and Het Belang van Limburg report STVV want to keep the player. However, they add that it’s not going to be that simple.

STVV have already told the youngster they’d like to work with him for longer, but ‘a deal with Arsenal is questionable’. There’s wider interest in the forward, both from bigger clubs in Belgium and elsewhere. 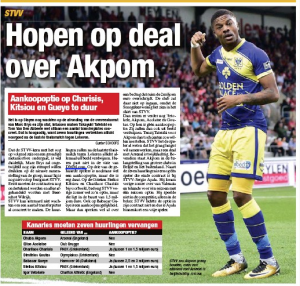 Akpom has a single year of contract left with Arsenal, so to make another loan realistic he’d have to extend his deal with the Gunners.

There’s clearly serious decisions to be made regarding the footballer’s future, and STVV probably think they’re towards the back of the queue.