After a summer of clearing the decks for Newcastle, the Magpies have turned their attention to adding instead.

They’ve already completed a club-record deal for Joelinton, and now it seems they are looking to add another right back to the squad.

L’Equipe report that they are on the hunt for an understudy to right-back DeAndre Yedlin and that has led them to looking at Amiens right-back Emil Krafth.

The Swedish player spent last season on loan at Amiens from Bologna and impressed enough for them to turn the deal into a permanent move this summer.

He’s seemingly caught the eye of Newcastle, though and L’Equipe claim he is ‘on the list’ of potential signings this summer. His agent, Patrick Mork, has also hinted there is interest, telling the newspaper there are ‘several big clubs’ looking at his client. 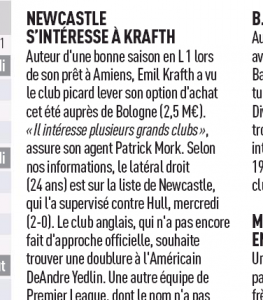 L’Equipe say there is another, unnamed, Premier League team beside Newcastle who have inquired about the player, while there are also clubs from Russia and Turkey keen on his signature.

Amiens, for their part, would not stand in the way of a transfer and they want a ‘big fee’, which is thankfully only thought to be €5m.