A year ago, we covered reports from Spain about Adrian Balboa signing for Leeds United from Barcelona club U.D. Unificación Bellvitge.

Catalan newspaper Sport called the youngster a ‘sensation’, detailing the striker’s scoring records through the youth divisions. There were of course big hopes but, as so often happens with young footballers moving to a new country, things never really took off.

That’s leading Balboa back to Spanish football, with Mundo Deportivo, another Catalan newspaper, reporting the player is on the verge of signing for Terrassa FC.

The move from Leeds to the Spanish third division side is presented as imminent, and Mundo Deportivo don’t mention any other club being involved.

This is curious, as earlier this summer there’d been claims Balboa had signed for CD Badalona. Indeed, a Twitter account claiming to be the club’s official communication, although not verified, announced it. 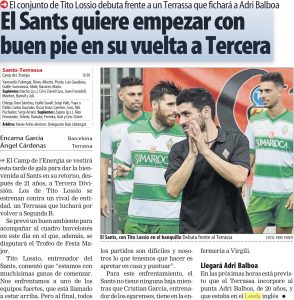