Bayer Leverkusen defender Mitchel Bakker is only interested in talking about a move to Newcastle United once they’ve agreed on a transfer price for him.

That’s according to De Telegraaf, who say the full-back is ‘fully focused’ on Leverkusen for the time being.

Newcastle are continuing their efforts to bolster their squad before the end of this month after the signings of Kieran Trippier and Chris Wood.

They have several irons in the fire and are particularly focused on the Dutch market, with Bakker, and fellow countryman Sven Botman both believed to be on their list.

De Telegraaf cover that today and state that when it comes to Bakker, the Magpies are making efforts to secure a deal with Bayer Leverkusen. 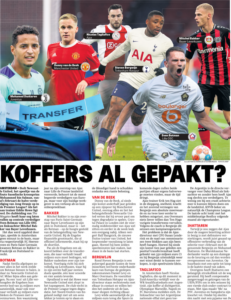 The defender has ‘been informed’ of Newcastle United’s interest and the fact that they have made ‘official enquiries’ regarding a move.

However, he has decided to remain focused on his current club for the time being and will only think about his future in Germany when Newcastle have agreed on a price with Leverkusen. The asking price is reportedly €12m.

Once a deal is agreed, he seems more than willing to discuss terms with Eddie Howe and co, but until that happens, his focus is on Leverkusen.