Home Europe Player hopes to fly in ‘next few hours’ to have medical on...
SHARE

Roque Mesa to Sevilla seems to be speeding up, with different Spanish newspapers having the deal at varying stages of being done.

AS say Mesa is now just hours away from moving to Sevilla, with both the Spanish club and Swansea City determined to formulate a loan until the end of the season.

Wednesday saw the club almost finalise the terms of a loan, and Mesa himself hopes to fly in the ‘next few hours’ to Sevilla to complete his move to the club.

Then will follow the routine medical checks ahead of a transfer and Mesa’s presentation by Sevilla. This is very much seen by AS as a transfer which is a matter of time, rather than one which is still in the balance of being done or not.

Estadio Deportivo, a local Seville newspaper, say only the fringes of a transfer are still being finalise, and Swansea City will continue to pay a percentage of the player’s wages until the end of the season. 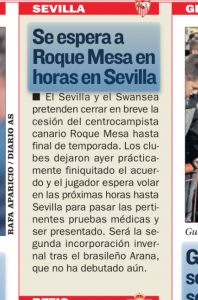 Sevilla will also have a buying option over the player when his loan move comes to an end.

Estadio Deportivo say Mesa wasn’t able to succeed in the Premier League because football here is ‘very much played in the air’, which seems to be using a stereotype to excuse him not being able to settle and make an impact.

As we explained earlier, Swansea City need to be careful they’re not taken for a transfer ride here: ‘Sevilla don’t have the best reputation when it comes to loans and transfers. They’ll try every trick in the book to get one over on the selling club, even if that means working to lower a player’s value towards the end of the loan by pushing him aside.

Samir Nasri started off great during his Sevilla loan, and was even one of the best players in La Liga, but the club, never having any intention of using their €25m buying option (which they’d considered too high) played him through injury continually and rushed him back from issues, and by the end of the season he was a shell of the player he had started off in Seville as.

Nasri, having been bang on song and back to his, went down a slippery slope which essentially saw Manchester City lose out on a reasonable fee.

Last summer there was the Jordan Amavi medical debacle and that was before they put old boy Jesus Navas through a summer of uncertainty to force the cost of his wages, he arrived on a free transfer, much lower than had been expected.

When it comes to Sevilla, seller, or loaner, beware.’